The CLEENIK is a meeting methodology, a format that seeks to devise spaces to share and learn how to practice forms of ethnographic experimentation in fieldwork. Drawing on practices of care it aims at unfolding the conditions to tame the anxieties and uncertainties provoked by these particular ethnographic modalities we call ethnographic experimentation. It is addressed to anthropologist and ethnographers and it is especially apt for researchers in the early stage of their careers. It requires 1-2 hours and a small group of participants (around 10-15), for larger groups it is recommended to split in smaller units.

An anthropologist suffering from Excess of Engagement Stress (EES) when things between you and your natives get ‘too involved’, another experiencing a DDID Dissociative Disciplinary Identity Disorder and another one with positionalitis. These are just some of the symptoms and diagnosis collected in the second operation of the Clinic of Anthropological Ethnographic Experiments in Fieldwork. The CLEENIK, for short, is a especially designed format to treat anthropologists suffering from the multiple syndromes consequence of ethnographic experimentation during fieldwork.  It is what we call an apprenticeship format for fieldwork learning, a pedagogical methodology especially designed to host, share and debate those ethnographic investigations carried out by anthropologists (and more generally ethnographers) that feels they are transgressing the assumed conventions of the ethnographic method. It is addressed to researchers that experience anxiety, uncertainty and doubts about what they may consider an appropriate practice of the ethnographic method. The CLEENIK aims at offering a protected space to those vulnerable investigators and open a space to share the uncertainties and apprehensions of their ethnographic projects.

It seeks to devise a different format of getting together, opening a space for care and complicity. Drawing inspiration on the common practices of self-help groups, the CLEENIK proposes a therapeutic space to take care of the anxiety so common in certain ethnographic projects (especially among young researchers). The therapeutic rhetoric is a playful parodic gesture that seeks to highlight the relevance of caring practices in all these encounters where we share knowledge.

Experimental collaborations
The CLEENIK comes of an investigation over the forms of ethnographic experimentation in fieldwork, a project that builds on our own ethnographic experience and those of others that have felt that their research cannot be appropriately described drawing on the most conventional tropes of fieldwork. We have experienced a form of engagement in our field that could not be described drawing on the traditional figure of participant observation. Our presence in the field shifted from the previously experienced modality of ‘participating in order to write’ (Emerson et al. 2005: 26) to a more engaged and interventionist practice. The experimental condition we appreciate in these ethnographies resonates and expands in new ways recent reflections contending the need to readdress fieldwork and reformulate its practice (Faubion and Marcus, 2009; Fabian, 2014). We echo debates on the place of ethnography in the production of anthropological knowledge (Ingold, 2008) and the transformation of the norm and form of fieldwork in a series of projects that have injected an experimental drive (Rabinow et al. 2008) and the need to ‘re-function ethnography’ (Holmes and Marcus, 2005).

Anxieties
This modality of ethnographic experimentation is accompanied by an intense experience that investigators are transgressing the norm and form of ethnography. Whether this is the case, or not, is not the point for the CLEENIK. The issue at stake is the associated anxiety and uncertainty that is especially acute and relevant for researchers in the early stages of their career. An experience that is not exceptional, since we have discovered similar fieldwork instances in other researchers during the early stages of their careers, as Isaac Marrero-Guillamón describes in his account of an ethnography among activist artists in London: “I had wanted to follow some artists’ work, but I was invited to become a collaborator; I had imagined that fieldwork would be based on some kind of distance with the objects and subjects of study, but I instead participated in the production of the very things I was studying; I failed to keep up with essentials such as field notes, and I wrote for the projects I wanted to study more often than about them” (2018: 183).The CLEENIK seeks to devise apprenticeship spaces for these ethnographic modalities and, at the same time, unfold the conditions to tame the anxieties and uncertainties provoked by this particular form of doing fieldwork.

Care and clinic
The CLEENIK is an adaptation of a previous format called Klinika, a methodology that we learnt from a collective called ColaBoraBora, a cultural and artistic association. The figure of the clinic tries to invoke the notion of care as a key practice. Theoretically it draws on Maria Puig de la Bellacasa (2017) discussion of an ethics of care that speculates with forms of living together, paying attention to the obligation not to just be concerned but “to take care of the fragile gathering things constitute” (Puig de la Bellacasa 2017: 45). It finds resonances on the artistic project of Natalie Jeremijenko of an Environmental Health Clinic, a project modelled after the notion of health clinics that “approaches health from an understanding of its dependence on external local environments; rather than on the internal biology and genetic predispositions of an individual”.

Fabian, J. (2014). Time and The Other: How Anthropology Makes its Object. New York: Columbia University Press.

Marrero-Guillamón, I. 2018. ‘Repurposing Ethnography as a Hosting Platform in Hackney Wick, London’. In Experimental collaborations. Ethnography through Fieldwork Devices, edited by A. Estalella and T. Sanchez Criado. New York: Berghahn.

Methodology
The format is organized in two parts. In the first parts the public is split in groups of 4-5 participants, they have to use a file card that is hand out, in the second part participants get together again and share the work they have produced. In the first section each participant is given the CLEENIK Clinical Report, a small booklet with three different sections, each one should be filled by a different participant.

In the first section of the clinical report each participant will have to describe his/her symptomatology: stating in a free but straightforward and thorough manner the nature of her/his problems in or after fieldwork. When finishing this first section, the clinical report will be hand out to the person sitting next, each participant will have to read the symptomatology of another participant and produce a diagnosis, speculating about the potential causes or the ethology of these symptoms.

When finishing this second part, the same clinical report will be passed out to a third participant, this one will have to read both the symptomatology and the diagnosis and based on both he/she will have to proposed a treatment, inviting to consider programmes and courses of individual and collective therapeutic action to tackle the symptoms.

Duration
The format requires at least 1 and 1.5 hours. Approximately 10 minutes should be dedicated to each of the three sections of the clinical report, and another 20-30 minutes should be dedicated to share in common the different symptoms and diagnosis when the first part of the format has been completed. Optionally, it is possible sometimes to open a third section: a final reflexive discussion on the format itself (10-20 minutes).

Participants
CLEENIK is appropriate for anthropologist in any stage of their career although it has been originally designed for early stage career scholars. In any case, it is designed for anthropologist with fieldwork experience, otherwise it would be difficult for them to participate. The operation of the CLEENIK requires intimacy and a limited number of participants, probably no more than 15.

Resources
Cornerstone in our experience in the CLEENIK format is the clinical report. It structures very easily the activity in three differentiate phases where everybody knows what to do. The second crucial aspect is that it draws on the common practice among anthropologist of writing. There is a model for the clinical report that may be modified, it may be found here: http://xcol.org/interventions/cleenik/

For guidance, you might want to refer to the Ethnographic Disorder Manual (v 1.0 July 2016) compiled by our renown experts: DOC format & PDF format.

If you’d like to set up your own CLEENIK, please do copy the model, it’s open source!

CLEENIK is an open-source adaptation and a continuation for ethnographic audiences of ColaBoraBora’s Klinika also an adaptation of an initiative by Maria Salazar, part of her artistic residence at Muelle3 in Bilbao (more info here). 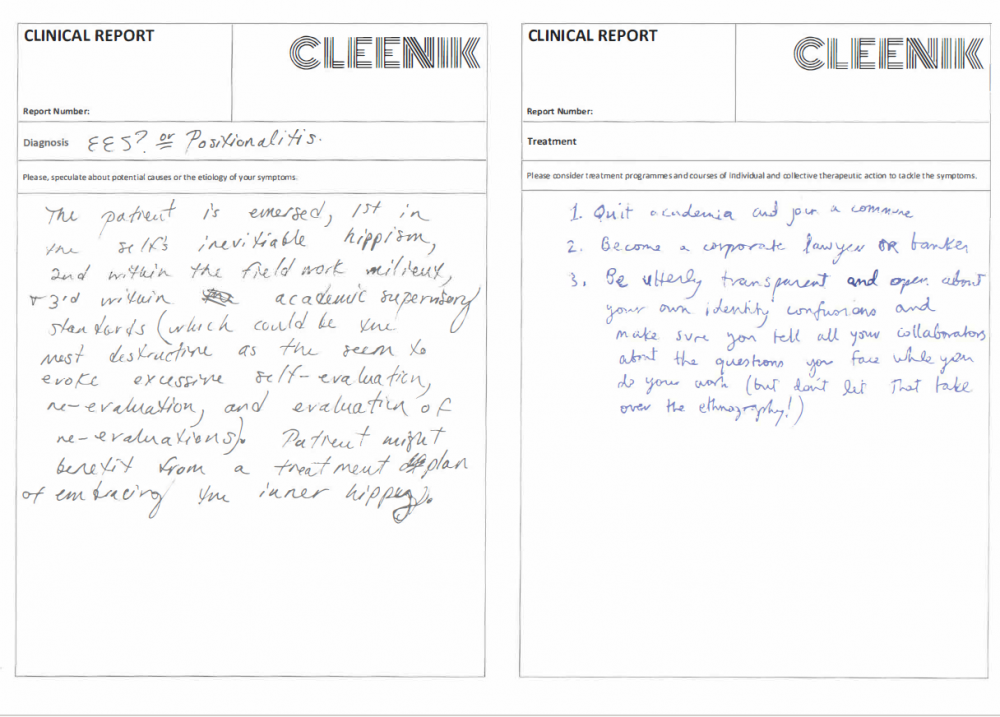